HomeMarketsWarren Buffett's Berkshire Hathaway has scored a 30x gain on its BYD investment. Here's the story of its bet on the Chinese electric-vehicle company.

Warren Buffett's Berkshire Hathaway has scored a 30x gain on its BYD investment. Here's the story of its bet on the Chinese electric-vehicle company. 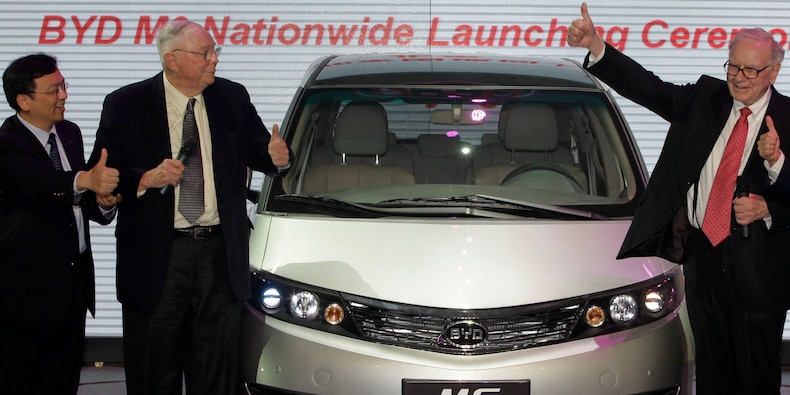 Warren Buffett’s Berkshire Hathaway has made more than $7 billion on its BYD investment to date, representing a roughly 30-fold gain.

The famed investor’s conglomerate spent $232 million to buy 225 million shares in the Chinese electric-vehicle company in 2008, paying about $1 per share.

BYD’s stock price has skyrocketed more than 3,000% to the equivalent of $33 since then, rising more than five-fold over the past year alone. Its market capitalization has mushroomed from less than $3 billion to more than $95 billion as a result.

Here’s a closer look at one of Berkshire’s most unusual investments.

“Charlie called me one day and says, ‘We’ve got to buy BYD, this guy that runs it is better than Thomas Edison,'” Buffett told CNBC in 2018.

Munger made the same comparison in a Fortune cover story in 2009.

“This guy is a combination of Thomas Edison and Jack Welch – something like Edison in solving technical problems, and something like Welch in getting done what he needs to do,” he said. “I have never seen anything like it.”

Read more: A portfolio manager who has invested in SPACs since 2007 recounts their evolution from ‘financial backwater’ then to ‘feeding frenzy’ today – and shares how to identify attractive ones, including 3 on his radar

Adequately impressed, Buffett and his team struck up talks with BYD and initially offered to buy 25% of the business. Wang wanted the American billionaire’s backing, as he knew it would supercharge the automaker’s public profile and help it make inroads into the US market. However, he turned Buffett down because he didn’t want to part with more than 10% of BYD’s stock.

“This was a man who didn’t want to sell his company,” Buffett told Fortune. “That was a good sign.”

Berkshire eventually settled for a 9.9% stake, purchased by its MidAmerican Energy subsidiary. The holding represented about 25% of BYD’s Hong Kong-listed shares, and 8.25% of its total outstanding shares.

Munger defended the unusual bet on a Chinese technology startup at Berkshire’s annual meeting in 2009.

“BYD is not some early-stage venture capital company,” he said. Munger pointed out that Wang had already taken the business from a standing start to becoming a leading global manufacturer of rechargeable lithium batteries and cell-phone components.

Wang was “not satisfied with having worked a couple of miracles,” Munger said, so the entrepreneur then set his sights on the automotive industry. BYD, despite having limited capital and facing fierce competition, quickly made the bestselling car model in China.

“This is not some unproven, highly speculative activity,” he continued. “What it is, is a damn miracle.”

Munger also emphasized the importance of BYD’s advances in clean-energy technology, given its critical role in combating climate change.

“It may be a small company, but its ambitions are large,” he said. “I will be amazed if great things don’t happen here.”

“I have never in my life felt more privileged to be associated with something than I feel about BYD,” he added.

Munger returned to the subject at Berkshire’s 2010 meeting, arguing the wager showed he and Buffett were capable of adapting their investment approach.

“Berkshire would not have made an investment in BYD if the opportunity had come along five or 10 years earlier,” he said. “And it shows that the old men are continuing to learn, and that’s absolutely essential.”

“BYD had won its spurs in life by the time we found it,” Munger said. “They had accomplished things that struck me as almost impossible to do, and yet they’d done them.”

The automaker has grown stratospherically since Berkshire became a shareholder, albeit with the help of government subsidies. Its revenue has skyrocketed from 26 million Chinese yuan in 2008 to 122 billion yuan ($19 billion) in 2019, boosting its net income from 1 million yuan to 1.6 billion yuan ($250 million) over the same period.

Buffett summed up Munger’s fondness for BYD in a 2018 interview.

“Charlie’s in love with the company and it’s done very well,” he said. “The fella that runs it has got big, big ideas and he’s very good at executing.”