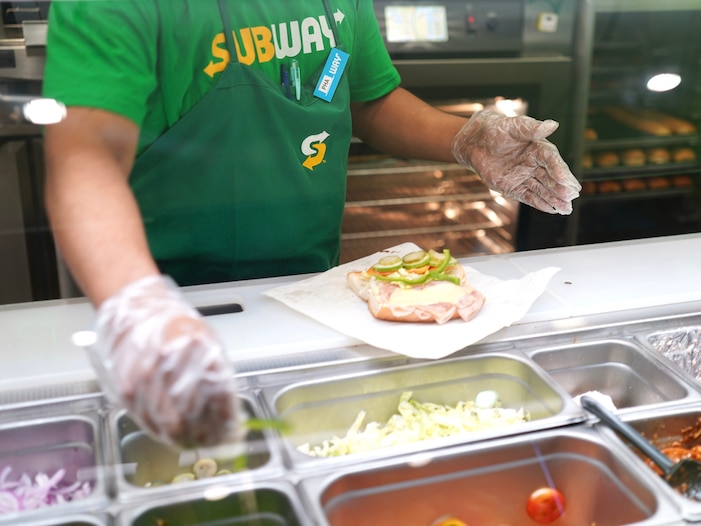 A Subway employee making a sandwich.

Subway, the biggest fast-food chain in the world, lost about 10% of its restaurants in 2020, Restaurant Business reported Friday.

The publication reported that 2,200 to 2,400 Subway restaurants closed last year during the pandemic.

The closures represent a significant impact on individual business owners, as the company does not operate its own restaurants, but rather relies on franchises.

A Subway spokesperson did not immediately respond to a request from Insider seeking confirmation of the closures. But in an emailed statement to Restaurant Business, the Connecticut-based company disputed the number of storefronts that shuttered.

“We can tell you that the figure you provided is not accurate,” the company said. “The number of permanent closures in 2020 is lower than your estimate, as there are temporary closures due to COVID.”

Like many restaurants and chains, Subway saw a decline in sales at the onset of the coronavirus pandemic due to stay-home orders and restrictions on in-person dining.  By June, the food and restaurant industry overall had already lost nearly $120 billion in sales, according to the National Restaurant Association.

The company might have overextended itself in 2020. Workers blasted Subway for requiring 23,000 US stores to resume operating at 84 hours per week in September, according to the New York Post. Franchisees told the Post the corporate demands were unreasonable as they were forced to pay employees and maintain store hours even as sales continued to lag.

Read more: 8 food brands that experts predict will IPO in 2021, from Impossible Foods to Chobani

While Subway saw a decline in sales, other fast food chains edged ahead, taking advantage of local restaurant closures to expand their footprints. Chains with more delivery and drive-thru options were more easily able to adapt to social distancing restrictions.

Subway tried to adapt to customers needs during the pandemic, even selling grocery items at more than 250 of its US locations. Yet, the chain has not been able to compete with companies like McDonald’s and Chick-fil-A, as the sandwich shop has significantly fewer drive-thrus than its competitors – a mere 600 compared to McDonald’s 13,000.

At near 40,000 locations, Subway has the most restaurants of any fast-food chain in the world, spanning over 100 countries. Yet, the company has been in decline for the better part of the past decade.

Some franchise owners attribute their store’s closure to Subway’s business model, which prioritizes the number of stores over strategically placing the stores.

“I feel their concerns 10 years ago was just opening up locations,” a franchisee with two locations told Business Insider in 2017. “We had people open up on all sides of us,” the franchisee said. “That was definitely a problem.”

Some of the business strategies that initially brought Subway the most success have failed the company in recent years.

During the 2008 recession, Subway marketed its $5 footlong, which found traction as people looked to trim their spending habits. However, footlongs became less and less likely to fall under $5, as most menu items did not qualify for the purchase despite Subway’s marketing campaign.

When the company tried to relaunch $5 footlongs in 2020, the promotion flopped as Subway required customers to buy two footlongs instead of one in order to get the deal.

Subway’s other famous marketing campaign, Jared Fogle – a man who claimed to have lost hundreds of pounds by eating Subway in 2000s commercials – also came back to bite the company. In 2015, Fogle plead guilty to having sexual relations with minors, as well as distributing child pornography.

Just a year later, for the first time in its history, Subway closed more stores than it opened in the US.

Subway stores have become less attractive to franchise owners over the years, as largely stagnant prices have made it increasingly difficult for owners to turn a profit.

Since the fall out from Fogle, Subway has continued to attempt new marketing strategies. In January, the chain updated their menu to include protein bowls.