HomeMarketsSalesforce could buy Slack for over $17 billion, and the deal would turn up the heat on both companies' rivalry with Microsoft

Salesforce could buy Slack for over $17 billion, and the deal would turn up the heat on both companies' rivalry with Microsoft 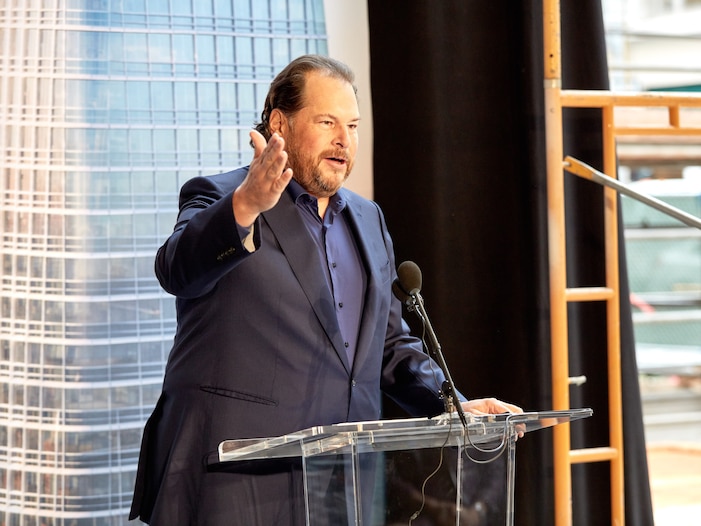 Salesforce has held talks to buy the workplace messaging app Slack, according to a report from the Wall Street Journal on Wednesday morning. If it goes through, the deal would be Salesforce’s largest ever, capping off a years-long acquisition spree that’s included companies like MuleSoft and Tableau.

Salesforce is in advanced talks with Slack, and that a deal could be announced within days, potentially by the time Salesforce reports its quarterly earnings on Tuesday, according to the report. However, there’s no guarantee it will lead to an acquisition.

However, if a deal is reached, the report indicates that Salesforce would likely pay more than the some $17 billion at which Slack was valued at market close on Tuesday — surpassing its acquisition of Tableau for over $15 billion in 2019. Shares in Slack are up over 30% on the news at the time of publication, while Salesforce stock is off some 5%.

A deal between Salesforce and Slack would make sense for both companies and put increased competitive pressure on Microsoft, several analysts said. That’s important, as both Salesforce and the smaller Slack are significant Microsoft rivals in their own right.

Analysts recently told Business Insider that the growth of Microsoft Dynamics 365 threatens the “iron grip” that Salesforce holds on the customer relationship management (CRM) space, while Slack has shown signs that the rise of Microsoft Teams has put a strain on its growth prospects.

By teaming up, analysts now say, Salesforce would be better-positioned to compete directly with Microsoft Teams and the larger Office 365 suite of which it’s a part, while Slack gets the resources it needs to build momentum in the marketplace.

“This deal would be a major shot across the bow at Microsoft with the company’s Teams offering a direct messaging competitor against Slack that has been a clear hurdle to growth and now would be a two horse race between Microsoft and Salesforce,” Wedbush analyst Dan Ives wrote in a note to clients.

As Microsoft becomes a stronger competitor to Salesforce, one of its strengths is that its various tools —like its sales and service software Dynamics 365, its simple app development suite Power Platform, and productivity applications like Word and Excel — are all integrated. Microsoft is increasingly positioning Teams as the “hub for work” where those apps connect.

Teams is included for free with business versions of the Microsoft Office 365 productivity suite. Its usage has grown tremendously this year, hitting 115 million daily active users in October, up from the 75 million it announced in late April and 44 million in mid-March.

Salesforce, for its part, has made some moves to take on the collaboration and productivity space over the years, including the business social network Chatter and the acquisition of web-based word processor Quip. Ultimately, though, Microsoft (and to a lesser extent Google) still dominate the market: It’s “a huge business opportunity that Salesforce has sort of failed to really unlock,” said Futurum Research analyst Dan Newman.

Adding Slack to the portfolio would allow Salesforce to combine its own productivity products in much the same way that Microsoft has with Teams, analysts said. The moment could be right to strike, too, with demand for these kinds of tools spiking in the pandemic-driven remote work boom.

“Slack would give Salesforce a big step toward being on every desktop,” said Valoir analyst Rebecca Wettemann. “Although it gained collaboration capabilities with Quip, given the growth and adoption of Slack it would further its collaboration strategy as well as its ambition to penetrate the enterprise beyond traditional CRM users.”

Additionally, it’s in line with Salesforce’s strategy of relying on acquisitions and inorganic growth to drive its overall growth. Salesforce “lacking infrastructure, has to find new ways to grow, and this is a potential new way to grow,” Newman said.

An acquisition would be good for Slack’s future growth prospects

For Slack’s part, many analysts see an acquisition as a positive sign for its future growth and prospects. As other collaboration tools like Zoom and DocuSign have seen skyrocketing demand during the pandemic, Slack’s growth rate has been on par with pre-pandemic levels. That’s put pressure on Slack’s stock, and left analysts skeptical about the company’s future growth.

“Microsoft Teams has been capitalizing on this opportunity better,” Jaluria said. He attributes the disparity both to how Microsoft bundles Teams in with the Office 365 suite, but also because of Slack’s lack of focus on videoconferencing and file-sharing beyond its core chat capabilities.

The momentum around Teams has helped it overcome what analysts say are Slack’s key advantages: Better integration with third-party tools, and relatedly more love from developers who build extensions and add-ons for the platform. With the growth of Teams has come a vibrant developer ecosystem around the app, Jaluria said in a note to clients, which “chips away at one advantage we thought Slack had: developer adoption.”

Slack has escalated the rivalry, going so far as to file an antitrust complaint with the European Commission, alleging that Microsoft’s practice of bundling Teams with Office 365 is anticompetitive. Microsoft responded by saying Slack suffered from its absence of video conferencing during the pandemic.

By joining Salesforce, however, analysts expect that it would take a lot of pressure off of Slack. The smaller company would get access to Salesforce’s massive customer pool, including its roster of big-ticket enterprise customers, driving the kind of growth that it needs to build its business further.

“Slack would instantly be propelled into C-level executive discussions across industries,” RBC analyst Alex Zukin wrote in a note to clients.

Got a tip? Contact this reporter via email at pzaveri@businessinsider.com or Signal at 925-364-4258. (PR pitches by email only, please.) You can also contact Business Insider securely via SecureDrop.