HomeMarketsPricey whiskies and cognacs are outshining cheaper booze as Americans drink at home. Here's why distillers and analysts predict the category's sales will continue to grow after the pandemic ends.

Pricey whiskies and cognacs are outshining cheaper booze as Americans drink at home. Here's why distillers and analysts predict the category's sales will continue to grow after the pandemic ends. 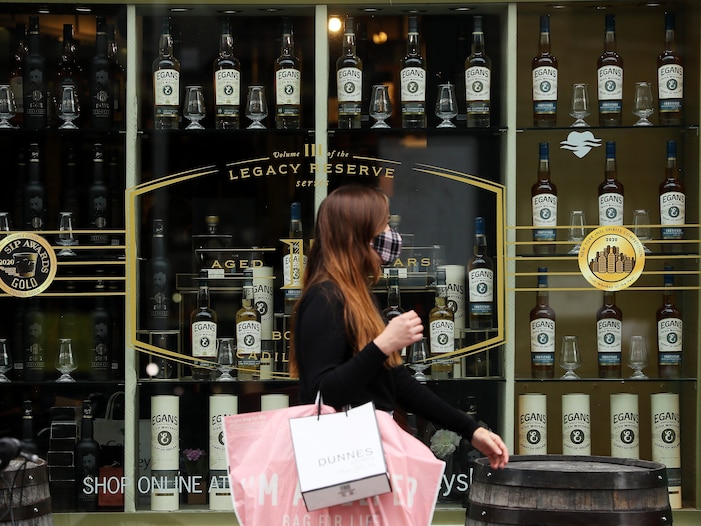 The coronavirus pandemic and an ensuing recession has pushed Americans to buy more booze at their corner liquor shop. But ironically, many are reaching for top-quality spirits instead of trading down amid a tough economic climate.

Sales of ultra-premium spirits, generally those that sell for $25 a bottle or more, rose more than 40% at retailers over a 52-week period ending on December 26, according to data from Nielsen. That’s compared to the roughly 11% growth in sales those spirits produced for retailers over a similar period in 2019. Of the lower-priced spirit categories that Nielsen tracks, none grew nearly as much during either period.

Part of the reason for this boom in premium spirit sales is a trend common to many food and beverage companies these days: More consumers are dining at home, meaning they are pouring their own glasses of Patron tequila or Remy Martin cognac instead of going out to bars or restaurants, where business remains down significantly.

Read more: ‘Plant-based’ energy drinks, almonds, and cleaners are taking over grocery stores. Here’s how the term evolved and devolved as brands tapped into the $5 billion market.

But there are reasons to think that this dynamic might shape consumer habits after the pandemic ends. Many people have realized they can take the money that they formerly spent on a few drinks after work at a bar and buy an entire bottle, sometimes opting to go a grade above what they were used to, said Laurence Whyatt, an analyst at Barclays.

“I can go buy myself the bottle of Johnnie Walker Blue instead of the Johnnie Walker Black at four times the price,” he said in an interview. “I think that’s the mentality that has increased premium sales.”

What consumers’ post-pandemic drinking habits look like will depend on factors such as how much of the population continues working from home permanently as well as whether drinkers are willing to trade back down to cheaper options, Whyatt said.

“I wouldn’t be surprised to see people perhaps drinking slightly less, but drinking better,” he said.

Another factor that could determine sales of pricier spirits going forward, according to Whyatt: income inequality. Countries like Turkey or South Africa represent particularly appealing markets for makers of high-end spirits since they offer a low cost of living but have many affluent potential drinkers with lots of disposable income at the top of society.

“As inequality increases, typical wealthy premium spirits purchasers benefit, and therefore the number of consumers willing/able to purchase premium spirits increases,” he wrote in a report earlier this month.

To Whyatt’s point, economists from the International Monetary Fund and other authorities have said that the pandemic is widening income gaps in a host of countries.

At Brown-Forman, which makes Jack Daniels whiskey and Herradura tequila, spirit sales have gone up overall even with many bars and restaurants closed or only offering drinks for takeout, CEO Lawson Whiting told analysts during an earnings call in December.

“This has been unlike any other recession that we’ve experienced,” Whiting said. “In the US, ultra and super-premium spirits are gaining share at faster rates than in the pre-COVID time periods.”

Restaurants, bars, and other places where people gather to drink are traditional testing grounds for new products created by manufacturers since consumers tend to try new drinks by the glass instead of the bottle. Whiting said he expects that dining out will be “slow to come back,” adding that Brown-Forman has put more effort into promoting new products at specialty liquor shops.

Major distillers were already betting on higher-end alcohol well before the pandemic, with companies like Constellation Brands and Pernod Ricard investing in upstart brands, many of which sell high-end drinks. At the same time, many manufacturers have sold off brands that retail for less, focusing their portfolios on more expensive drinks.

Companies have also continued to beef up their premium spirits offerings during the pandemic. In October, UK-based Diageo acquired Chase Distillery, which makes specialty gins in flavors like Seville Marmalade, Pink Grapefruit, and Pomelo.

“Post-pandemic, we expect the super-premium segment to continue to grow [more than] 10%, underpinning a gradual shift of Diageo’s gin portfolio towards higher price points,” UBS analyst Nik Oliver wrote about the Chase deal in October.

Growth projections from IWSR, which tracks alcoholic beverage sales around the world, suggest that companies are likely to keep focusing on the higher end of the market. In the US, sales volumes of “prestige” spirits, which IWSR defines as beverages that sell for $100 or more per 750 milliliter bottle, are expected to grow by 9.2% on average each year between 2019 and 2024.

By contrast, IWSR expects various “premium” spirits, those it defines as having price tags between $22.50 and $99.99, to grow an average of 2.7% annually. Sales of spirits that retail for $22.49 and less, meanwhile, are expected to decline slightly.