HomeMarketsNASA has given up on its 'Mars mole,' a revolutionary experiment designed to burrow 16 feet and take the planet's temperature

NASA has given up on its 'Mars mole,' a revolutionary experiment designed to burrow 16 feet and take the planet's temperature 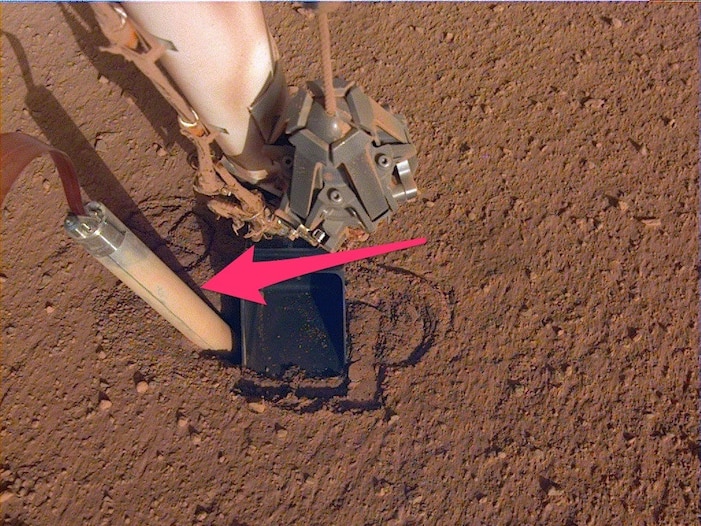 NASA has given up on its InSight lander’s “mole” after two years of trying to dig more than a few inches into Mars’ uncooperative soil.

The 16-inch-long pile driver was designed to hammer through the loose dirt that previous Mars missions had encountered. The soil would flow around the probe’s outer hull and provide friction to keep hammering deeper.

This way, the InSight team hoped, it would burrow up to 16 feet deep and take the planet’s temperature for the first time. Previous Mars landers had only scooped a few inches into the Martian surface.

The project would have revealed how much heat is leaving the red planet – warmth left over from Mars’ formation some 4.6 billion years ago. These measurements would help scientist reconstruct the planet’s history, as well as that of Earth and other rocky worlds. Internal heat can also come from decaying radioactive elements. Figuring out what’s inside Mars would help scientists determine whether it’s made from the same material as Earth. 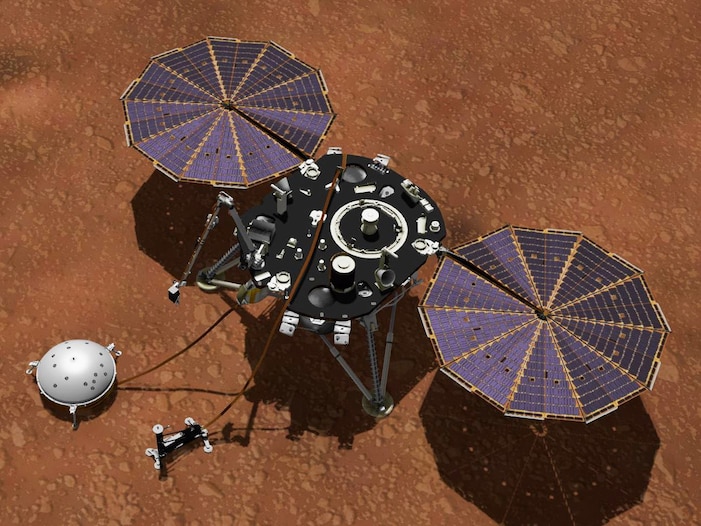 An artist’s concept shows NASA’s InSight lander with its instruments deployed on the Martian surface.

But the soil around InSight ended up being too clumpy and cement-like to provide the critical friction that the mole needed. On February 28, 2019, the InSight team realized that the device was simply bouncing in place as it hammered at the Martian crust.

By then, NASA had spent about $830 million on InSight, so it wasn’t prepared to give up on the groundbreaking new heat probe just yet.

However, after two grueling years of troubleshooting, the top of the mole is still just 2 or 3 centimeters below the surface. NASA announced Thursday that it was abandoning efforts to dig any further. 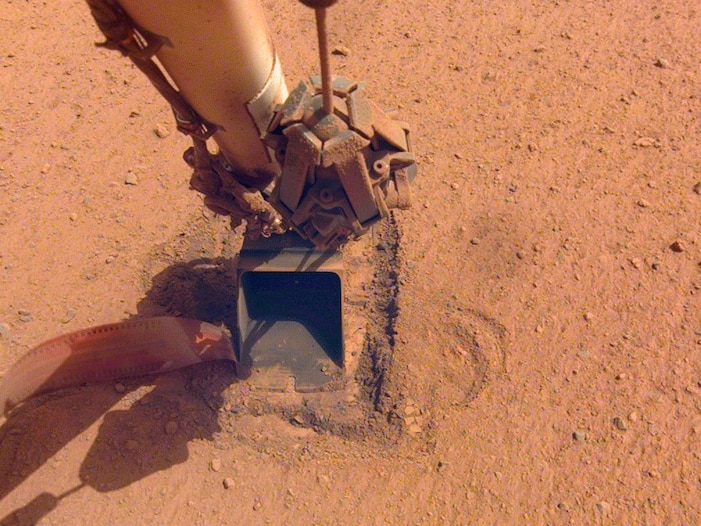 The hole where the InSight lander’s mole is buried, after its last hammering effort on January 9, 2021.

“After nearly two years of heroic effort on the part of the whole NASA InSight team, we now turn to the epilogue of the mole’s story,” Troy Hudson, a NASA scientist and engineer who led the troubleshooting efforts, wrote on Twitter. “Lots for me to process about this.”

In its extended mission over the next two years, InSight will listen for quakes on Mars and collect data on the planet’s rumblings with its seismometer. This can still teach scientists about the planet’s interior. Already, Mars quakes have revealed that the Martian crust is drier and more broken up than scientists previously thought ⁠- more like the moon than like Earth.

‘We’ve given it everything we’ve got’

As soon as the InSight team discovered a problem with the soil two years ago, it instructed the lander to move supporting gear out of the way. InSight lifted away the Heat Flow and Physical Properties Package (HP3) – a device containing all the engineering and mechanics that connect the mole to the lander – to make way for its multipurpose robotic arm. 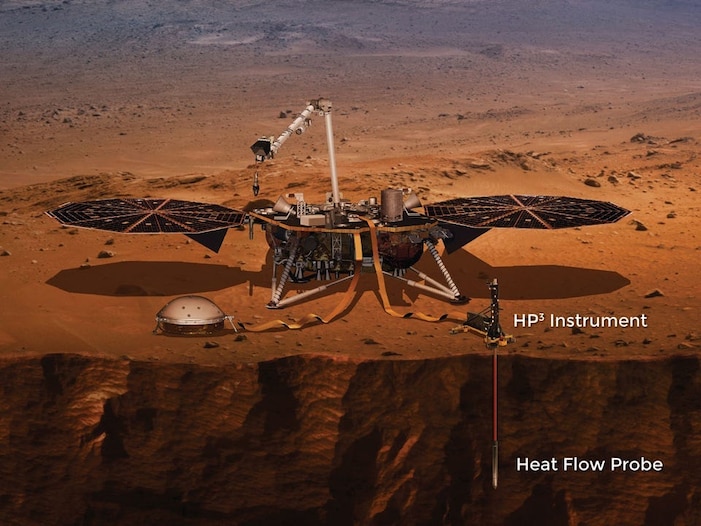 An illustration of the InSight lander with its mole burrowed in the ground.

The only visible part of the mole was its tether, trailing out of the soil. The cable is lined with temperature sensors that would have collected data all the way down the mole hole.

To avoid touching this fragile tether, the InSight team tried using the robotic arm to press against the side of the mole, giving it some friction to dig down. Twice, the mole bounced back, shooting about halfway out of the dirt. It took until October 2020 to get the probe fully back into the ground. 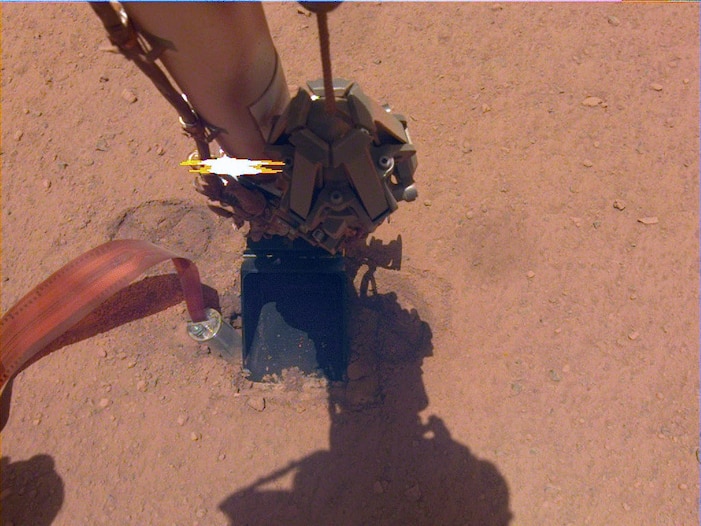 InSight’s mole backed about halfway out of the hole it had burrowed on October 26, 2019.

Then the robotic arm tried a new technique: scooping dirt on top of the mole hole and tamping it down, in an effort to provide the friction needed to burrow. After the probe conducted 500 fruitless hammer strokes on January 9, it became clear that the mole wasn’t digging any deeper.

“This was disappointing news to have when the images came down over the weekend, but it was an amazing process working with all these engineers trying to figure this out,” Mark Panning, a seismologist on the InSight team, wrote on Twitter.

“We’ve given it everything we’ve got, but Mars and our heroic mole remain incompatible,” Tilman Spohn, the principal investigator for the mole, said in a press release. “Fortunately, we’ve learned a lot that will benefit future missions that attempt to dig into the subsurface.”

The crisis forced the InSight team to use the lander’s robotic arm in new and creative ways – an experience that could be handy for future interplanetary missions. The team now plans to use the arm to bury the tether connecting the lander to its seismometer. That should reduce background noise in its quake readings.

“The mole is a device with no heritage. What we attempted to do – to dig so deep with a device so small – is unprecedented,” Hudson said in the press release. “Having had the opportunity to take this all the way to the end is the greatest reward.”