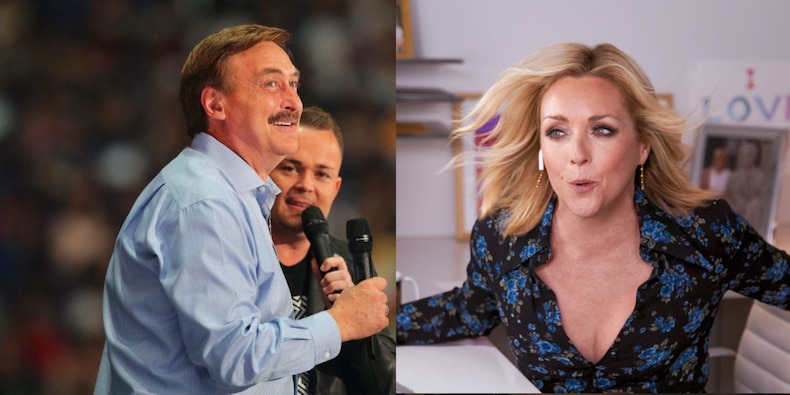 Jane Krakowski denied having been in a relationship with My Pillow CEO Mike Lindell, but her publicist joked that she is “in full-fledged fantasy relationships with Brad Pitt, Rege-Jean Page, and Kermit the Frog, and welcomes any and all coverage on those.”

Mike Lindell, the Trump-boosting CEO of MyPillow, is suing the Daily Mail for defamation and libel over its publication of a story about him being in a months-long secret relationship with “30 Rock” actress Jane Krakowski.

Last week, the British tabloid reported that Lindell courted Krakowski and that they started dating a year ago, based on a tip from “an anonymous friend.”

The outlet reported that Lindell wooed Krakowski with flowers and champagne, and that their fling came to an end this summer after multiple trips to see each other.

“It surprised many of Jane’s friends because she’s such an icon in the gay community, but here she is dating one of Trump’s biggest business backers,” the anonymous friend reportedly told the Mail.

Both Krakowski and Lindell denied the story. But Lindell is taking things a step further after threatening the Mail last week. According to court documents seen by Insider, he is suing for defamation and libel.

In the lawsuit, Lindell alleges that the story has caused “personal harm and emotional distress,” largely because the piece alleges that Lindell sent Krakowski alcohol.

“As a recovering addict and alcoholic, who frequently writes and speaks about his spiritual triumphs over substance abuse, Mr. Lindell is horrified by the defendants’ fabricated and very public accusations,” the lawsuit says.

Throughout the document, Lindell references the Lindell Recovery Network, a substance abuse recovery platform he created, alleging that the story has hurt his reputation and ability to provide services. Lindell also reasserts that he has never heard of Krakowski.

Krakowski offered a second denial to the story as well. Last week, her publicist issued a statement saying, “Jane has never met Mr. Lindell. She is not and has never been in any relationship with him, romantic or otherwise.”

“She is, however, in full-fledged fantasy relationships with Brad Pitt, Rege-Jean Page, and Kermit the Frog, and welcomes any and all coverage on those,” the publicist added.

In recent weeks, Lindell spoke with Insider and doubled down on his support for Trump through his last days in office.

Lindell publicly backed Trump in the 2016 election and throughout his presidency. On January 16, Lindell had a confusing meeting with Trump in which he boosted conspiracy theories about the election and Dominion Voting Systems. As a result, several major retailers have dropped MyPillow, citing decreased consumer demand.