HomeMarketsMeWe doesn't want to be the next Parler. But extremist hoards are coming to is social media site anyway.

MeWe doesn't want to be the next Parler. But extremist hoards are coming to is social media site anyway. 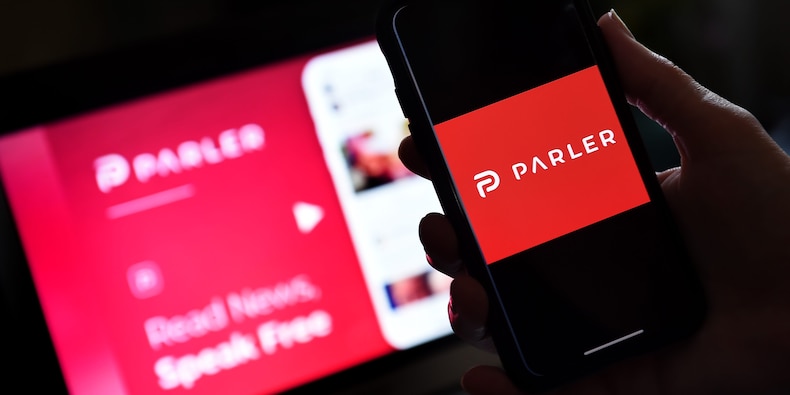 This illustration picture shows social media application logo from Parler displayed on a smartphone with its website in the background.

Now that Parler has been kicked off the internet for no-one-knows-how long, right-wing extremists are on the hunt for a new digital home. The social media app MeWe has emerged as a worthy contender – much to the app’s dismay.

On Twitter, MeWe tweeted over 28 times in a 24-hour period this week that they are “NOT an ‘anything goes’ site like Parler or Gab.”

It doesn’t matter; right extremists are still flocking to the app (along with platforms Gab and Telegram), seemingly banking on the fact that the company won’t have the resources to properly moderate them.

MeWe is an LA startup launched in 2016 by CEO Mark Weinstein as a privacy-centric alternative to Facebook. Weinstein has long been a outspoken advocate for privacy rights and attracted celebrity backers for MeWe such as designer Rachel Roy, Chicken Soup for the Soul’s Jack Canfield and Lynda Weinman, founder of Lynda.com. It’s raised a total of $14.5 million between angel and several seed rounds, according to Pitchbook.

The app operates similarly to Facebook, allowing you to add and message friends. But, founded in the wake of Facebook’s Cambridge Analytica scandal, Weinstein has vowed to never sell user data. While the app is free to join, users can upgrade to a premium plan for $4.99 a month and gain access to features like extra storage and video calling.

MeWe has experienced a bump in downloads since Parler was blocked on the app store – about 200,000 new users in the last week, according to TechCrunch.

One glance into the app’s many conservative groups reveals plenty of vitriol and misinformation similar to Parler’s. “We all know the capital storming had Antifa and bad actors,” one MeWe user wrote, repeating the misinformation that it wasn’t Trump supporters that rioted but people who oppose fascism.

Another declared that the Democrats “should be hung by the testicles.”

Many of these messages are shared in private groups or chat rooms with thousands.

When asked what MeWe is doing to moderate the influx of extremists, spokesperson David Westreich said, “MeWe has a strong Terms of Service designed to keep out lawbreakers, haters, bullies, harassment, violence inciters.”

He added the company is currently expanding its Trust and Safety Team and “adding new tools to help our moderators.”

Oribhabor said smaller platforms are often not properly equipped to moderate a huge increase in users. And, when pressed, platforms tend to brag about their privacy policies rather than deliver on their promises.

“We can’t just take their word that they have robust terms without seeing what they actually do to enforce this,” she said.

Oribhabor said MeWe should follow in the footsteps of larger tech companies and release a report of its own. These reports keep the public up-to-date on key information like how many moderators the platform has, what content gets flagged, and how many posts get removed.

But MeWe says it doesn’t have a problem.

“Haters, conspiracy theorists, violent insurrectionists, extremists, etc. are far more prevalent and active on Facebook and Twitter than on MeWe,” Westreich said. “On Saturday, Twitter even made ‘Hang Mike Pence’ a trending topic broadcasted to all Twitter users. Egregious.”

It’s worth pointing out that this is the exact example Parler’s CEO John Matze used to rail at big tech and characterize Parler, rife with discussions on storming the capital as the siege took place, as a free-speech platform.

“Apple will be banning Parler until we give up free speech, institute broad and invasive policies like Twitter and Facebook and we become a surveillance platform,” Matze wrote in a Parler post. “The same day ‘Hang Mike Pence,’ a disgusting violent suggestion, was trending nationally on Twitter. Displaying the horrible double standard Apple and their big tech pack apply to the community.”

Oribhabor said this rationale – that widespread hate on MeWe or Parler is inevitable because Twitter also struggles with moderation – is uncompelling.

“It’s not a good argument to say ‘but Twitter is also bad,'” Oribhabor said. “That does not absolve them from any of the consequences of their lack of content moderation, or lack of strong policies that lead to the kind of violence that we saw last week.”