An illustration of SpaceX’s Starship spaceship and Super Heavy rocket booster launching together from a pad near Boca Chica Beach, South Texas.

Elon Musk, the aerospace company’s founder, wants the vehicle to stand 120 meters (394 feet) tall, be fully and rapidly reusable, and affordably launch people to the moon, Mars, and even from one point on Earth to another.

But to pull off this bold vision, SpaceX will need methane – the most abundant ingredient in natural gas – and a whole lot of it.

In fact, each flight of a 16-story Starship spaceship and its 23-story Super Heavy rocket booster may require more than 1,400 tonnes (3.1 million pounds) of liquid methane, according to a draft federal document acquired by Insider. That’s more than half of an Olympic-size swimming pool’s worth of fluid.

SpaceX may be planning to extract most, if not all, of that fuel from the ground in Boca Chica, a relatively remote and wildlife-rich area at the southeastern tip of Texas where SpaceX is developing Starship, that same document indicates.

The document is dated May 2020 and titled “Draft Environmental Assessment for SpaceX Starship/Super Heavy Launch Vehicle at SpaceX Texas Launch Site in Cameron County, Texas.” It is authored by the FAA’s Office of Commercial Space Transportation, which licenses commercial rockets like SpaceX’s for launch.

According to the draft, SpaceX’s plans to drill “[u]p to five natural gas wells” at its launch site (called the vertical launch area, or VLA) next to Boca Chica Beach. The company may also build facilities tied to gas extraction, storage, and electricity generation near its sprawling rocket factory (or production area) a couple miles up the road.

Insider obtained a copy from Jim Chapman, president of the Friends of the Wildlife Corridor, a non-profit organization that aims to preserve and expand wildlife habitat. A spokesperson for the FAA did not dispute its authenticity, but told Insider the file “should not be relied on as authoritative” and described it as preliminary, incomplete, and unfinished.

SpaceX did not respond to Insider’s requests for comment on the matter.

The roughly two dozen pages describe in great detail SpaceX’s evolving plans for reaching orbit with Starship from Boca Chica. The information not only jibes with Musk’s public statements about the Starship rocket site, but also materials posted to an FAA “stakeholder engagement” website for the company’s rough plan and a recent report by Bloomberg.

Why SpaceX may want to get into the natural gas business 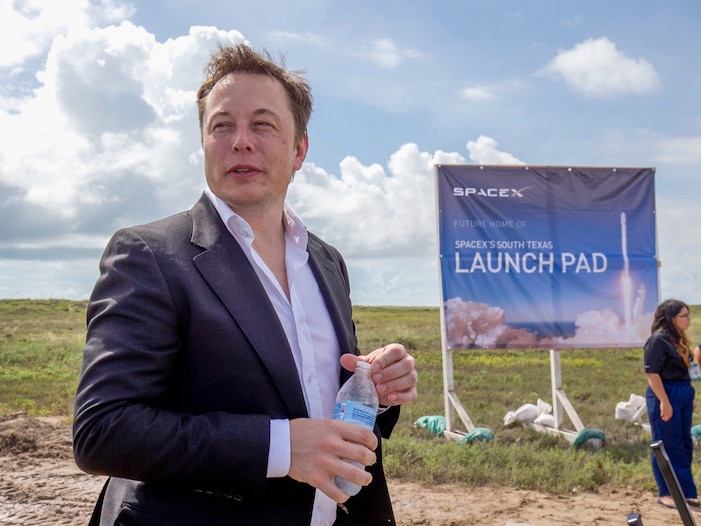 Up to this point, SpaceX has flown full-scale Starship prototypes on up-and-down suborbital test flights at the site. The first rocket, called Starhopper, flew to about 150 meters (492 feet) and landed in August 2019. The most recent prototype, called Starship serial No. 8, or SN8, flew tens of thousands of feet above south Texas, belly-flopped, landed upright (but at too high a velocity), and exploded.

As the vehicles and ground operations mature, though, SpaceX is looking to further expand its capabilities. With that comes a need for fuel and power.

On Friday, Bloomberg broke the news of SpaceX’s plans to drill gas wells at the launch site. SpaceX is conducting that effort through a subsidiary called Lone Star Mineral Development, which in June 2020 purchased oil rights to more than 800 acres of Texas land.

However, as Bloomberg reported, Dallas Petroleum Group has ensnared SpaceX’s gas extraction plans by claiming rights to inactive wells on the same land. Dallas Petroleum did not immediately respond to Insider’s request for comment.

Bloomberg said it was “unclear what exactly the gas would be used for.” But the May 2020 document received by Insider suggests that SpaceX plans to extract the natural gas, remove contaminants like mercury and sulfur, condense the methane into a liquid, and store the fuel as a propellant for Starship launches.

SpaceX may also use the gas to produce more power for its facilities via gas-burning turbines, according to the document.

“One to two power plants would be constructed to generate power for activities across the SpaceX facilities, including at the launch pad. The power plants may be located to the southwest of the SpaceX production area and/or at the VLA and each would be up to approximately 5.5 acres in size,” the document said.

Those power plants would ostensibly pull oxygen from the atmosphere and liquefy it. For every liter of liquid methane, Starship needs about 3.6 liters of liquid oxygen to combust the fuel in Starship’s Raptor rocket engines.

Similarly, SpaceX may also use its on-site power plants to pull out and liquefy nitrogen and argon from the atmosphere. 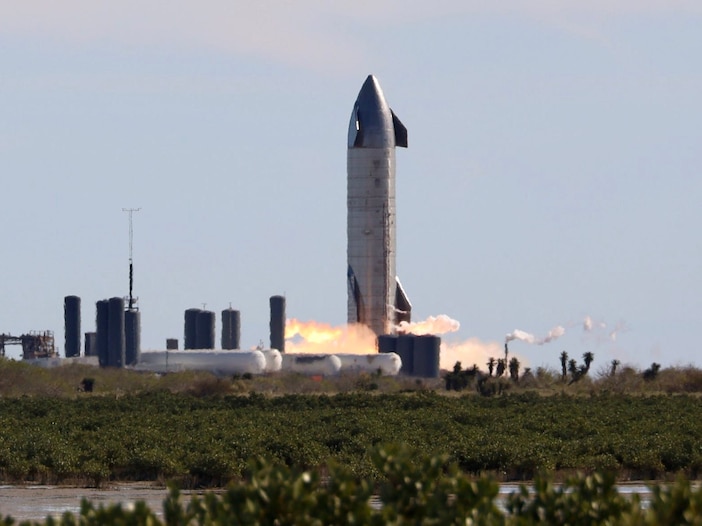 These apparent plans to drill gas wells and build gas-fired power plants contrast with Musk’s long-term plans for Starship. In a September 2019 presentation from the company’s Boca Chica production area, Musk said he planned to both harvest and manufacture rocket fuels using only renewable energy.

“Long-term, we will produce the propellant for the rockets using solar power,” Musk said at the time. “[We’ll] pull CO2 [carbon dioxide] from Earth’s atmosphere, use water, [and] combine that to create CH4 [methane] on Earth. And so the long-term outcome will be quite sustainable and renewable.”

Methane, when released into the atmosphere, is a powerful climate change agent, possessing more than 80 times the warming power of carbon dioxide in its first two decades. Burning methane also creates carbon dioxide, which is a weaker but longer-lasting agent of climate change.

To attack this problem, Musk on Thursday offered $100 million “towards a prize for best carbon capture technology.” Such a technology could help neutralize the climate effects of methane and carbon emissions from Starship launches – perhaps millions of flights per year, if SpaceX’s long-term goals are to be believed.

In the meantime, though, SpaceX apparently plans to use natural gas to power its Starship ambitions as the company pushes the FAA to grant an orbital launch license.

SpaceX’s future for Starship in Texas is under environmental review 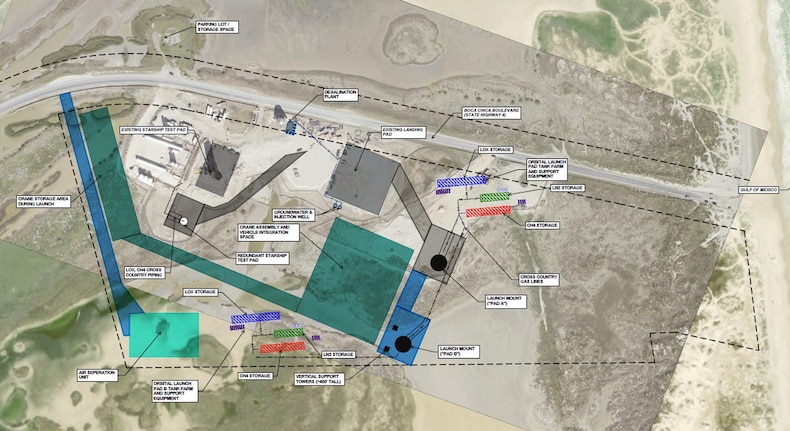 SpaceX’s proposed Boca Chica launch area layout, including natural gas wells, from a May 2020 draft of an FAA environmental assessment provided to Insider.

SpaceX hopes to move on from suborbital “hops” of Starship prototypes and start conducting much more powerful, ambitious, and riskier launches to low-Earth orbit. To do this, though, the company needs a new launch license from the FAA.

Part of that process requires the company to study how its future operations may impact the area – apparently leading to the draft environmental assessment sent to Insider, embedded below. (We have removed comments and metadata to help protect the document’s source.)

An environmental assessment typically takes three to four months to complete. However, if the process reveals “impacts that cannot be mitigated,” according to the FAA, SpaceX may need to conduct a far more thorough environmental impact statement – a process that can take one to three years.

“A definitive timeline to complete the draft EA has not been determined. Once the draft EA is available for review, it will be posted to the project website, notification will be sent to the project mailing list and public announcements will be made via traditional and social media outreach,” the FAA spokesperson told Insider.

SpaceX in July 2014 completed an environmental impact statement for its Boca Chica operations. However, that document covered Falcon 9 and Falcon Heavy launches to orbit, not Starship vehicles. The document did specify flying “a variety of reusable suborbital launch vehicles,” though, which has permitted SpaceX to conduct low-flying Starship tests.

Insider in October requested final versions of documents related to SpaceX’s south Texas launch site through the Freedom of Information Act. The FAA on Tuesday released to Insider three different documents spanning 101 pages of records, though none were an environmental assessment. This suggests a final document is still in the works.