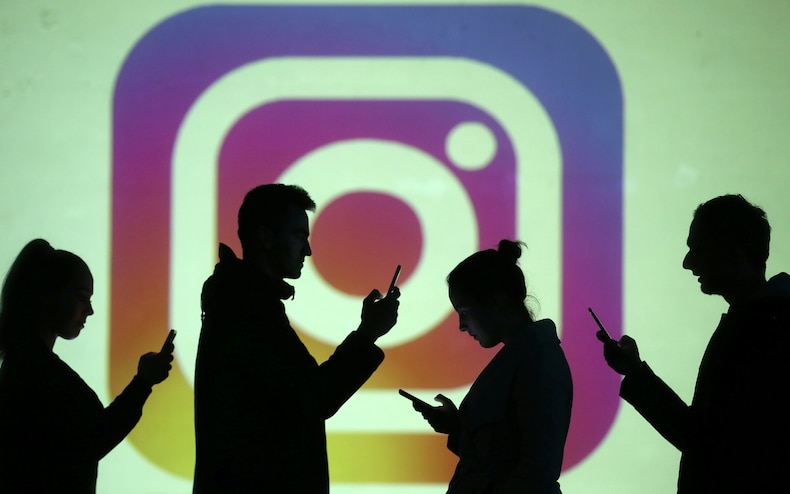 Silhouettes of mobile users are seen next to a screen projection of Instagram logo in this picture illustration taken March 28, 2018.

As TikTok’s popularity shot short-form video to the forefront of the influencer industry in 2020, platforms like Instagram felt pressure to adapt – and fast.

In August, Instagram launched Reels, its short-form video feature that looked almost exactly like TikTok. Soon after, YouTube announced it would launch “Shorts” and Snapchat debuted “Spotlight,” both of which were takes on short-form video.

Reels was first met with mixed reviews from the industry. But as the months progressed, many influencers told Insider they had warmed to the feature because it had reignited their audience growth on the app. Instagram had made Reels a priority and creators who used it regularly reaped the benefits.

“I haven’t had this growth in a long time since I started Instagram,” content creator Christine Tran Ferguson recently told Insider.

But still, Reels has not yet done much to innovate in short-form video, the head of Instagram Adam Mosseri recently said.

“I’m not yet happy with it,” Mosseri told Nilay Patel in a recent episode of The Verge’s podcast, Decoder.

Mosseri said TikTok was ahead of Instagram in product innovations like creating new filters, AR effects, and meme trends.

Reels has had multiple updates in the last few months. The original 15-second videos can now be up to 30 seconds, new music capabilities were added, and shopping on Reels was introduced in December. And if Mosseri’s comment are an indication, you can expect more changes ahead.

One change that is on the horizon is expanded Insights, according to Jackson Williams, a member of Instagram’s creator partnerships team.

Williams told Insider in a recent interview that these metrics would likely mirror the Insights already available for Instagram feed and Stories posts. Creators can also currently synthesize the engagement rate of Reels by looking at the views (or plays), comments, and likes, Williams said.

For creators, understanding these metrics is crucial for calculating how to price Reels for brand sponsorships. It’s also critical for brands to understand the return on investment when using the feature to advertise on the app.

Read more: ‘The birth of an entire format’: Instagram’s short-form video feature Reels started as a TikTok copycat but has become a lucrative revenue source for influencers

A suite of services for creators to make money

“If we want to be the No. 1 place for creators, we need to make sure that we offer a suite of services that they find meaningful and valuable as opposed to just one type of unstable value, which is distribution,” Mosseri said on the Verge podcast.

The first category – commerce – is how a majority of career content creators earn a living through Instagram. Mosseri described this in an October presentation as encompassing branded content, affiliate marketing, and merchandise.

Mosseri said in October that “user pay” products would entail tipping, subscriptions, and paywalled content (such as newsletters, courses, or appearances like Cameo). Instagram launched Badges, its own “user pay” beta test in 2020, which allows creators to earn money from tips on Instagram Live.

Read more: Instagram’s COO breaks down its newly expanded tipping feature called ‘Badges,’ which one creator said earned her over $1,000 in a week

The last category is revenue share, which Instagram launched via IGTV by placing 15-second ads on videos. Creators can then earn a 55% commission. The program is still in beta testing.

In 2021, creators can expect Instagram to expand its tools for making money.

“The second half of last year, we were obviously super focused on starting to roll out IGTV ads, launching Badges,” Williams said. “I think the early work for this year is really going to be about expanding access to both of those for creators and making sure that we can start to deliver meaningful revenue to creators who are using those.”

“And then I think later in the new year, hopefully, you’ll start to see some additional innovation from us on ways that we can start to help creators monetize even further on Instagram,” Williams said.