HomeMarketsGoogle's new union is outraged as the firm investigates a second AI ethicist: 'Being targeted by one of the world's largest corporations is terrifying.'

Google's new union is outraged as the firm investigates a second AI ethicist: 'Being targeted by one of the world's largest corporations is terrifying.' 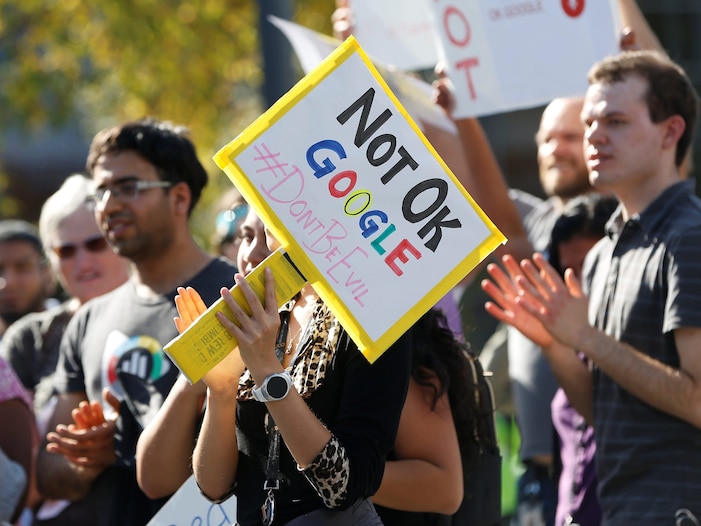 Protesters at the 2018 Google walkout.

The newly formed Alphabet Workers Union has hit out at Google after the firm confirmed it was investigating another senior AI ethicist within its ranks.

On Wednesday, the tech giant told Insider it had suspended the corporate account of Margaret Mitchell, a lead on its ethical AI team. The firm said she had downloaded and shared thousands of sensitive documents with external accounts.

The news was first reported by Dr. Timnit Gebru, who previously co-led Google’s ethical AI division alongside Mitchell, but left the company at the end of last year after she said she was fired.

“[Margaret’s] not fired **yet**. But apparently they’ve told her she will be locked out for at least a few days,” Gebru wrote on Twitter.

A Google spokesperson confirmed Mitchell had been locked out of her corporate account and said it was because she had shared “thousands” of files with external accounts.

“Our security systems automatically lock an employee’s corporate account when they detect that the account is at risk of compromise due to credential problems or when an automated rule involving the handling of sensitive data has been triggered,” the person said. The firm added that it was “actively investigating” the matter.

Now the Alphabet Workers Union, which went public earlier this month, has hit out at the decision to suspend Mitchell, branding the move an “attack on the people who are trying to make Google’s technology more ethical.”

The Alphabet Workers Union has sided with Mitchell.

In a statement, the Union said: “Regardless of the outcome of the company’s investigation, the ongoing targeting of leaders in this organization calls into question Google’s commitment to ethics – in AI and in their business practices.

“Many members of the Ethical AI team are AWU members and the membership of our union recognizes the crucial work that they do and stands in solidarity with them in this moment.”

The union claimed Google had departed from protocol by issuing any statement at all on Mitchell, and criticized the firm for having “directly attacked Margaret.”

It added: “Being an individual targeted by one of the world’s largest corporations is terrifying, and reinforces the need for unions in the workplace.”

Whatever the outcome of the investigation into Mitchell, internal tensions are unlikely to die down. Several other members of Google’s AI team publicly expressed support of Timnit Gebru and criticized company AI chief Jeff Dean for the handling of her departure. Some have likewise expressed solidarity for Mitchell.