HomeFeaturedChristopher Lee and Fann Wong become the ambassadors of OMG! Gods of Three Kingdoms in Singapore, Malaysia, and Vietnam

Christopher Lee and Fann Wong become the ambassadors of OMG! Gods of Three Kingdoms in Singapore, Malaysia, and Vietnam

HO CHI MINH CITY, Vietnam, June 8, 2021 /PRNewswire/ — OMG! Gods of Three Kingdoms is the latest Three Kingdoms-inspired strategy and role-playing mobile game published by VNGGames, launched in Singapore and Malaysia on June 2nd. The most notable difference is the unique combat mechanism, which combines the characteristics of the tactical genre and the trendy auto-battle system. 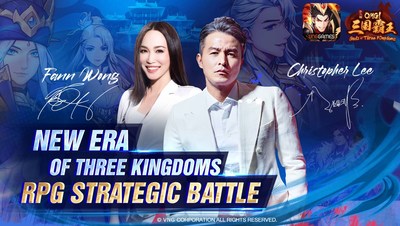 At the same time, OMG! Gods of Three Kingdoms also announces that Christopher Lee and Fann Wong are the ambassadors of the game. This news gets rejoiced and enthusiastically supported by players as well as their fans from across Asia.

Fann Wong is a top Singaporean actress while her husband Christopher Lee is a famous actor from Malaysia. They are a golden couple of Singapore Lion Island and have become familiar across Asia. People know them through their roles in hit films such as The Return of the Condor Heroes, The Legendary Swordsman, Madam White Snake, Moon Fairy, etc.

Although they worked in many genres of movies as well as many different roles in the entertainment world, their most impressive image is the hero and beauty in ancient dramas. However, fans have not seen them appear together in such an ancient visual for a while. So they are the best options to become the ambassadors of OMG! Gods of Three Kingdoms.

VNGGames is recognized as one of the leading game publishers based in Vietnam, part of VNG Corporation – Vietnam’s first-ever unicorn start-up (The Asean Post). With 16 years of experience in publishing games in Vietnam markets and some foreign regions, VNGGames is now seriously taking further steps to conquer the global stage, starting with SEA markets.