HomeMarketsA McDonald's franchisee said he had 'an EPIC time' in Washington, D.C. amid the Capitol riot. Now his posts are shining a light on the political struggle engulfing corporate America.

A McDonald's franchisee said he had 'an EPIC time' in Washington, D.C. amid the Capitol riot. Now his posts are shining a light on the political struggle engulfing corporate America. 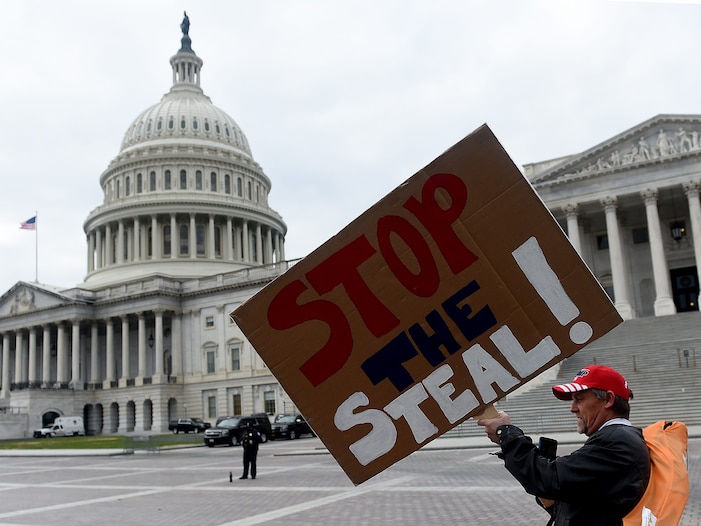 A McDonald’s franchisee joined other Trump supporters in protesting against a “stolen” election on January 6.

But, one of the fast-food giant’s own franchisees attended the pro-Trump rally in Washington, DC that baselessly pushed the claim that the presidential election was “stolen” by President-elect Biden.

Jim Wagy, a franchisee who owns multiple McDonald’s locations in Missouri and Kansas, posted at length about his trip to Washington, DC to participate in pro-Trump “Stop the Steal” protests on Facebook last week.

“What an EPIC adventure, in fact, it’s the craziest thing I’ve ever done!!” Wagy wrote in a since-deleted Facebook post on January 6.

Wagy stated in the post that the only saw peaceful protests, and that he did not go near the US Capitol, which was breached following the Trump rally. He said in the post that Black Lives Matter activists and Antifa were responsible for the insurrection, a theory that lacks evidence and is contradicted by the fact that many well-known Trump supporters live-streamed themselves breaching the Capitol.

“There were very few Antifa and BLM people that anyone saw!” Wagy wrote. “They were terribly out numbered! I think their main ops for today was to storm the Capitol posed as Trump supporters!”

Wagy said that he believed these groups had “other optics and orders,” and did not attend the rally where President Trump was speaking.

Wagy continued: “They attacked immediately and swiftly after the speech, because they were probably already in position! I think you’ll find as more information comes out, that this was the case, mixed with some over zealous and aggressive Trump supporters !!” 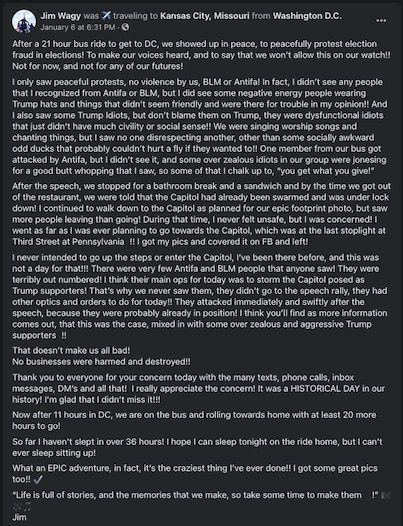 Wagy posted at length about his visit to Washington, DC on Facebook.

McDonald’s Corporation said in a statement to Insider that the company “found these social media posts particularly troubling and offensive to so many who wear the McDonald’s uniform.”

“We mean it when we say inclusion is a core value, and we’re looking into this very closely,” the statement continued.

Wagy told Insider in an email that he wanted to make it clear he was not part of the crowd that breached the US Capitol, and that he does not “support the lawless actions of those who did, and I believe they should be prosecuted accordingly.”

“I traveled more than 20 hours each way to Washington D.C. to see the President speak in person for the first time in my life, and to peacefully protest,” Wagy said. “I did not go near the Capitol building, its steps or its parking lot as things escalated. What happened inside the building was tragic, and goes against everything I stand for personally, as a business owner, and as an active and welcoming member of my community.”

Read more: 95% of McDonald’s franchisees vote to cut all ‘non-essential’ contact with corporate in protest over millions in new costs

Tensions are high within McDonald’s when it comes to politics 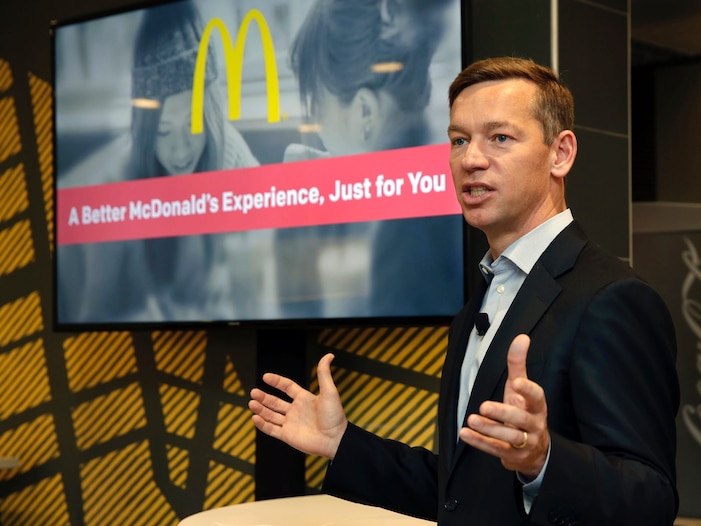 McDonald’s CEO Chris Kempczinski has emphasized values over the last year. But, what does that mean for politics?

This week, Stand Up KC and a McDonald’s franchisee who was disturbed by the posts shared screenshots of Wagy’s Facebook with Insider. The franchisee who shared the screenshots was granted anonymity to speak frankly on the matter.

“It’s unconscionable, but … the systemic racism goes all through McD’s. From operator to CEO,” the franchisee said. “Racism and sexism is deeply woven into the fabric of America.”

“Shortly after these attacks, I endorsed a statement from a group of fellow business leaders from top U.S. companies, the Business Roundtable, condemning President Trump and the other elected officials who incited this insurrection,” Kempczinski wrote.

McDonald’s announced earlier this week that the company’s political action committee paused political giving to ensure “all contributions continue to align with our values and the purpose of our business.”

“January 6 was a dark day in our nation’s history, and not one to be celebrated,” Mark Salebra, the chair of McDonald’s National Franchisee Leadership Alliance, said in a statement. “Like so many in this country, the National Franchisee Leadership Alliance, that represents all McDonald’s US franchisees, strongly condemns the unpatriotic acts of violence that occurred amongst the peaceful protesters and remains focused on serving our communities, our customers and our crew.”

The Capitol siege has forced big business to reassess how it interacts with Washington, D.C. Many industry leaders have distanced themselves from Republican politicians who voted against the 2020 election result, while companies spanning from Deutsche Bank to Girl Scouts are cutting ties with Trump.

Meanwhile, some companies have taken action against workers who participated in the Jan. 6 riot, which led to five deaths.  The Chicago Tribune reported that a Chicago area data analytics firm booted its CEO after he participated in the mob, while Forbes reported a Maryland man who stormed the Capitol was also fired.

Whether it’s acceptable to fire employees who attend actual protests is illegal in certain states. But, as The Washington Post reported, it’s become increasingly crucial for employers to build inclusive work environments. 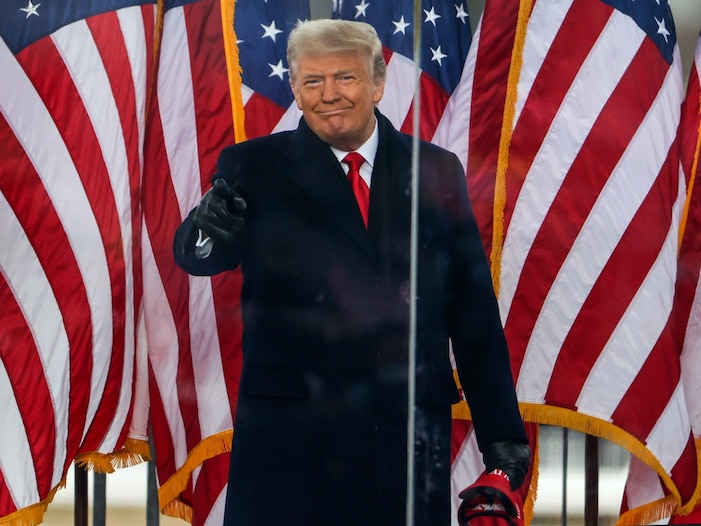 President Donald Trump at the “Stop The Steal” Rally on January 6.

As McDonald’s and other companies grapple with the best way to approach politics in 2021, some are struggling to unify those within their organizations.

A source within McDonald’s said that franchisees, employees, and suppliers expressed thanks for Kempczinski’s letter last week.

Another source with knowledge of McDonald’s franchisees’ thoughts on the matter said that some were dismayed by McDonald’s decisions. With recent tensions between franchisees and corporate, some felt that the letter was an opportunistic and self-serving move by corporate.

Multiple sources told Insider over the past year that some franchisees are resistant to what they feel is a push towards public political progressivism by McDonald’s corporate.

“Social Justice Warriors are now running McDonald’s Corporation,” one franchisee wrote in a Kalinowski Equity Research survey released in October. “Stuff that has nothing to do with selling Big Macs.”

McDonald’s has been vocal about certain social issues since Kempczinski was promoted to CEO in late 2019, following the termination of Steve Easterbrook after an internal investigation into a sexual relationship between Easterbrook and a subordinate.

The chain released a video supporting “Black Lives Matter” in early June, with the head of the US business Joe Erlinger saying in an internal webcast “we cannot go back to business as usual” following the death of George Floyd. In July, McDonald’s debuted refreshed values and new diversity initiatives. In October, the company announced it had hired former Obama advisor Katie Beirne to lead a new team focused on “positive change.”

Read more: McDonald’s hires ex-Obama advisor to lead a new team focused on ‘positive change,’ as the company doubles down on values in the midst of scandals

At the same time, 95% of McDonald’s locations in the US are owned and operated by independent franchisees, such as Wagy. While McDonald’s said that Wagy’s social media posts were offensive, the company declined to share further details on any guidance it may or may not have offered franchisees on sharing political sentiments publicly.

Following his attendance at the Jan. 6 protest, Wagy deleted his Twitter account. Archived internet posts reveal that Wagy used Twitter to circulate messages about new McDonald’s products and Biblical messages. He also posted YouTube videos of his drum covers and wrote about current events and politics.

One Tweet Wagy posted suggested that the Black Lives Matter demonstrations following the Minneapolis police killing of George Floyd had led to widespread theft of alcohol. “I wonder how many gallons and cases of alcohol has been stolen in the name of #GeorgeFloyd?!?” Wagy tweeted on May 31.

The vandalism sparked by BLM protests in the summer of 2020 ultimately cost the insurance industry at least $1 billion, but BLM organizers have said they do not condone this. It’s likely that violent or destructive actors this summer were not part of the BLM movement, but rather “arbitrary … individuals,” reported The New York Times.

Wagy did not respond to Insider’s request for comment specifically on his deleted tweets.